PCOS vs Endometriosis: Which Do You Have?

PCOS vs Endometriosis: Which Do You Have?

What are the symptoms of endometriosis?

What do PCOS and Endometriosis have in common?

How are PCOS and Endometriosis different?

Is it possible to have both endometriosis and PCOS at the same time?

How are PCOS and Endometriosis diagnosed?

Treatment for PCOS vs Endometriosis

Should I see my doctor?

Endometriosis and PCOS are two of our most-talked-about conditions here on the Full Stop blog. Since they have a few overlapping symptoms and can be difficult to diagnose, we thought it was about time we measured these two conditions up against each other to see what they have in common, how they differ, how to tell which one you have, and find out if it’s possible to have both at once. Here we go…

What are the symptoms of endometriosis?

Endometriosis is a condition where tissue similar to the kind lining the inside of the uterus starts to grow outside where it’s not supposed to, particularly on the ovaries, fallopian tubes and/or inside the pelvis. This tissue acts the same as the kind inside the uterus, so when your hormones go through the menstrual cycle each month, it thickens and breaks down.

When this happens inside the uterus, it exits through the cervix (your period) and it’s no problem. But when it happens outside the uterus it has nowhere to go, so it sticks around and causes anything from mild discomfort to severe pain, as well as a host of other issues.

PCOS stands for polycystic ovary syndrome, and it means the ovaries are producing an abnormal amount of androgen hormones. The name polycystic ovary syndrome is due to the small fluid-filled sacs (cysts) that form in the ovaries, causing symptoms like irregular periods, excess body hair (known as hirsutism), weight gain, acne or oily skin, baldness or thinning hair, fertility issues, and more. It has ties to type 2 diabetes as the majority of people with PCOS have insulin resistance.

What do PCOS and Endometriosis have in common?

A few things, actually! The overlapping symptoms of both endo and PCOS include heavy bleeding, bleeding between periods or irregular periods, pelvic pain, and difficulty getting pregnant. If you are experiencing these symptoms alone, it can be very difficult to differentiate between the two.

How are PCOS and Endometriosis different?

The main characteristics of both conditions are what give them away and stop them being mistaken for each other. The primary symptom of endometriosis is abdominal pain each month around the time of your period, while PCOS has a few visible tell-tale signs such as excess body hair growth and acne. Although these symptoms won’t affect everyone (making it a little harder to diagnose), in many cases they will be present in some form and this can indicate which condition you have.

The causes of both conditions are also very different. Most people with PCOS are thought to have an insulin resistance problem, while the cause of endometriosis remains a bit of a mystery. One theory that’s thought to potentially cause both is inflammation, which has been linked to both conditions in various studies.

Is it possible to have both endometriosis and PCOS at the same time?

Yes, unfortunately so! Although it’s highly unfair, it does seem to be possible to suffer from both conditions at once. One 2015 study found people with PCOS are actually more likely to be diagnosed with endometriosis too, and a 2011 study found the high androgen levels and insulin in people with PCOS could increase levels of oestradiol (a type of oestrogen), which could increase the risk of endometriosis.

How are PCOS and Endometriosis diagnosed?

Whether or not your GP suspects which condition you have, they will likely do some tests to find out for sure. For both conditions, diagnosis often involves discussing your medical and family history, doing a pelvic exam to check for any growths, carrying out an imaging test like an ultrasound or MRI, and taking blood to find abnormal hormone levels or inflammatory markers. If endo is suspected, a procedure called a laparoscopy may be required, where a surgeon makes a small incision to check for and remove abnormal tissue growth.

Treatment for PCOS vs Endometriosis

Treatment of both conditions can be similar, but in some cases it can look very different. Treatments that may be offered in both cases include being put on birth control to regulate hormones, and lifestyle changes to ease symptoms such as getting into an exercise routine and sticking to a healthy, balanced diet.

For endometriosis, you may be recommended to take pain medication or undergo surgical procedures to remove the affected tissue, while with PCOS you may be given medication to help specifically with hair loss, body hair growth, or acne symptoms.

Should I see my doctor?

If you have the symptoms of either endometriosis or polycystic ovary syndrome, it’s definitely best to speak to your doctor, particularly if these symptoms are affecting your daily life. Even if they are not, ignoring either condition can cause worse symptoms and health issues down the line, so make sure you get checked and start the recommended treatment plan in order to stay as healthy as possible.

Got a question about endometriosis or PCOS? We’d love to help you find the answers you need. Reach out any time in our Full Stop FB group, or get in touch with us directly on Instagram at @itsyoppie. Don't forget that our personalised menstrual care subscription can get organic tampons and much more delivered easily and regularly through your letterbox, to help keep at least some of that uterus-related pain under control each month. 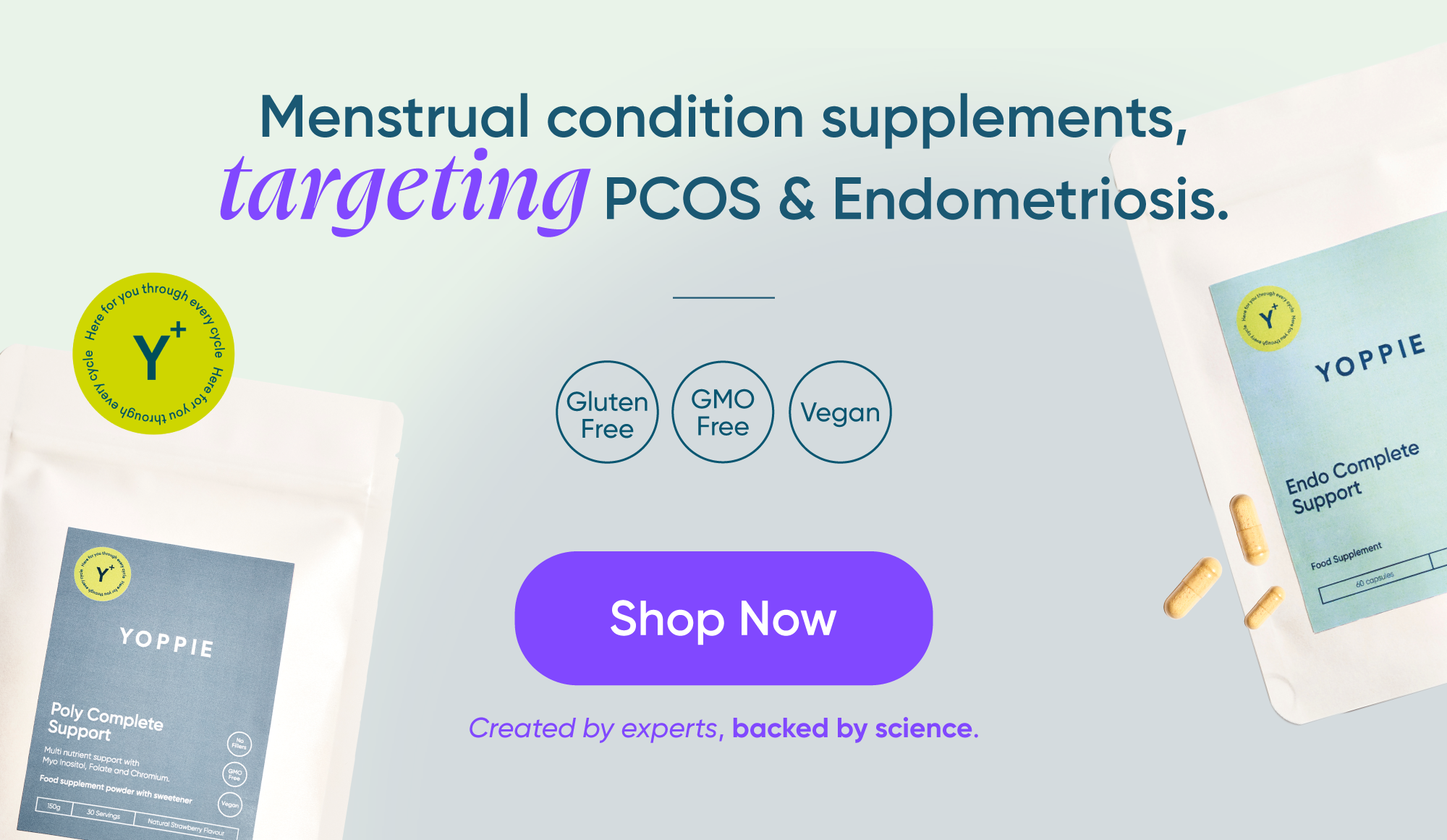 Adenomyosis vs Endometriosis: Which Do You Have?